Australian bond yields exploded higher this week. This was in the aftermath of the trimmed mean CPI read for the third quarter coming in above expectations. This would normally be supportive of the Australian Dollar. However, while interest rates were going north, commodities were going south, and the Aussie was left at the crossroads.

The RBA appears to have stepped away from holding down the interest rate on the April 2024 Australian Commonwealth government bond. The central bank has previously targeted 0.10% for this bond. If this is the case, this is effectively a hike in rates. Going into the end of the week, it is trading above 0.80%.

The RBA monetary policy meeting is this Tuesday. Globally, central banks have recently turned more hawkish than they have been previously. With inflation running hot in most parts of the world, central banks seem to have turned their attention away from stoking post-pandemic growth, to fighting untamed prices.

After comments from Federal Reserve Chairman, Jerome Powell, during the week, the notion of this bout of inflation being transitory appears to have been abandoned. Supply chain bottlenecks continue to plague global trade.

A problem for policy makers is that producer price inflation (PPI) indicators are at very high levels. That leaves businesses with the choice of either increasing prices that consumers pay, or reducing profitability, or a combination of these. On Friday, annual Australian PPI was released and came in at 5.3% to the end of September, above forecasts of 5.0%

For the Australian Dollar, it is a battle of relative interest rates. The RBA seem likely to make an adjustment to monetary policy on Tuesday afternoon local time. Then the Federal Reserve will finish their FOMC meeting some 38 hours later. The gap in timing might see AUD/USD volatility and depending on the level of hawkishness from the RBA, could be AUD positive.

Commodity prices are also likely to play a role for AUD/USD and may counterbalance favourable interest rate differentials for the Australian Dollar. Energy and metal commodities have moved lower through the week but have steadied going into the weekend. There have been a number of positive headlines for more supply of energy, but prices have remained relatively high. Structural problems within the energy sector are still on the radar.

After the RBA meeting on Tuesday, Australian building approvals and trade balance will be released on Wednesday and Thursday respectively. 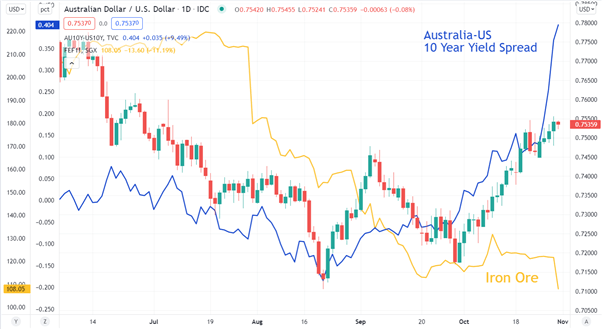